Peptide-based pharmaceutical technology requires the delivery of therapeutic oligopeptides as designed in a stable form for effective application. Downstream from therapeutic peptide isolation or synthesis, peptides are often subjected to HPLC purification, synthetic modification, and preparatory treatments for long-term storage. Spoilage in the form of aggregation, degradation or oxidation can occur during any of these processes. Using ARGEN, a user can correlate spoilage modes to changes in molecular weight. These correlations are generated continuously and concurrently with up to 15 other samples to rapidly survey a process for conditions leading to optimal product quality. In this study, ARGEN is used to analyze spoilage which caused increases in molecular weight due to aggregation or association. Specifically, this application note discusses measures of stability, Time to Dimer (TD), and Time to Tetramer (TT), and it is important to note that stable peptide products have very long TD and TT values.

Human Insulin (Sigma I2643) is dissolved in acidified deionized water to concentrations 2 mg/mL. After dissolution, pH is adjusted with 0.1 M HCl and 0.1 NaOH to pH 4.3. Each sample is loaded into a disposable polystyrene cuvette and held at a constant temperature for up to 48 hours as displayed in Table 1.

Table 1: Experimental conditions for peptide of interest, Insulin. (*) The reported value is that of the monomeric form. Insulin also exists in a hexameric form in solution.

Insulin shows easily observable aggregation over a 48-hour period as depicted in Figure 1. Insulin aggregates similarly to larger polypeptides previously studied by ARGEN, forming a milky solution after sufficient time passed. At 50 °C, the study’s lowest thermal condition, insulin remains somewhat stable with a low aggregation signal for 24 hours. In contrast, samples held at higher temperatures show exponential aggregation. Aggregation kinetics of Insulin incubated at 53.5 °C indicates there is a temperature dependent destabilization. Further destabilization occurs as the temperature increases to 57.0 °C. Kinetic data reveals the formation of metastable dimers in some samples after the initial heating. In the most thermally stressed samples, these dimers exist with little aggregation for several hours before aggregating to high molecular weight species. In less stressed samples, the metastable species exists for at least 24 hours before forming high molecular weight species. 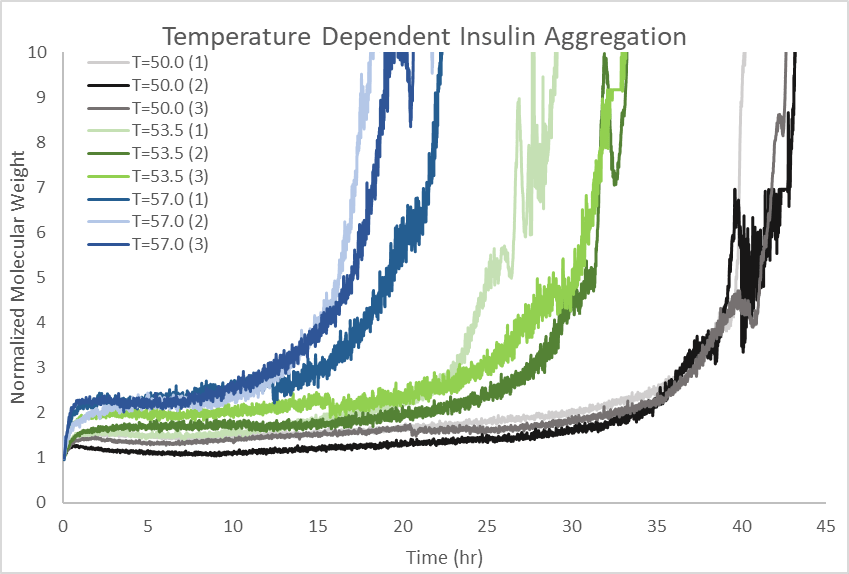 Figure 1: Insulin aggregates with Arrhenius-like kinetics for 48 hours. ARGEN observes a monotonic relationship between stability and temperature. Samples at 57 °C (Blue) are less stable than samples at 53.5 °C (Green), which are less stable than samples held at 50 °C (Black). Interestingly, many samples form metastable dimer populations that exist for several hours before aggregating to higher order multimers.

Analysis of kinetic data reveals two interesting measurements: Time to Dimer and Time to Tetramer. As aforementioned, several samples quickly achieve a population of metastable dimers (Figure 1). The high temperature sample is the quickest to achieve this population. The other samples do not form a population of metastable dimers, but they held samples with scattering signals higher than the monomer population (Figure 1, Figure 2; inset). Because Aggregation Rate (AR) is normally determined from the Time to Dimer, the AR measurement for the high temperature sample is inflated when compared to the other samples that do not show the existence of the metastable dimer population in their kinetic curves. This is displayed in Figure 2.

To better understand the stability of each sample, Time to Tetramer is used to calculate an Aggregation Rate, as Figure 3 exhibits. This measurement is a better reflection of each sample because it is independent of the formation of a metastable population. TT and the AR value derived from it reflect the speed at which nuclei for higher order aggregates are becoming ubiquitous in solution. The necessity of this measurement is not obvious without the time dependent normalized molecular weight curves. For the three thermal conditions in this experiment, the Aggregation Rates derived from Time to Tetramer show an exponential relationship where increasing temperature exponentially increases AR (Figure 3). 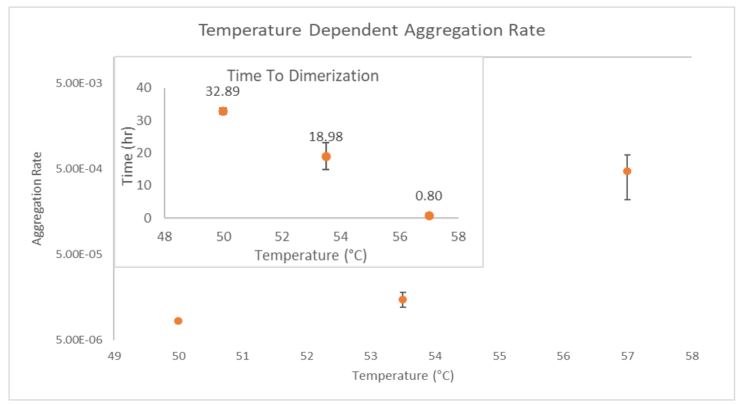 In this study, ARGEN is used to continuously monitor a vital peptide hormone based pharmaceutical. ARGEN demonstrates its utility in studying thermally induced peptide aggregation and the value of kinetic stability measurements when investigating protein and peptide aggregation phenomenon. The results of this experiment are intuitive, with increases in temperature causing faster aggregation; however, the observation of metastable populations would have been impossible without ARGEN’s continuous monitoring. This study highlights the benefits of continuous monitoring yielding realtime data. Further studies with ARGEN can investigate the effects of formulation conditions, storage conditions, or contaminant stressors on peptide stability.